Is The Legend of Zelda: Breath of the Wild, The Perfect Game?

As an avid ‘gamer’, it’s rare to find that hidden gem of a game that will take you into a new world and away from the daily grind, akin to how a devout reader might find that rare novel to them them far, far away from everyday responsibilities. When I take a look at my virtual map of Hyrule on my “Sheikah Slate” (Link’s iPhone), I don’t see a generic map … I see a story.

Unlike many other standard and similar games with maps and directions to follow, locations in The Legend of Zelda: Breath of the Wild aren’t just points and oddball names. They have meaning and history. They remind of the time I found a flaming dragon flying around deserted volcanos, the eerily spooky woods in which I became lost temporarily, and the silent and mysterious circle of statues I found towering above me in the desert. I think about the little guy who taught me how to snowboard on my shield on top of a hill, the whacky kid scientist running an ancient technology lab, and running scared from a half man-half lion creature. More importantly, i remember elements of games past, from my childhood (Old school Nintendo Zelda) and from college (Link to the past on N64), taking me back to another time when i last visited Hyrule.

Hyrule isn’t just the game’s setting. It’s the game. So much of what we do is utterly tied to the world in which it takes place. The action is intrinsic to and designed around the environment, whether we need to scout a location to recover a memory, steer Link’s paraglider through windy allies to reach a plateau, survive the bitter cold and extreme heat of exotic locations, or maneuver though ancient, stony mazes. We’re playing both inside and with the world. There’s never been anything quite like it. 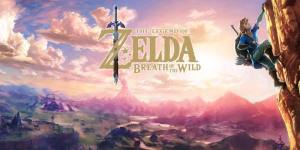 Zelda Breath Of The Wild

More than that, the world’s painting-like splendor gives soul to the story. It’s gorgeous vistas help to make this incarnation of Link and Zelda’s fight against Ganon a memorable exemplar of simple, traditional fantasy yarn-spinning. The world’s beauty is a big part of what makes their struggle worthwhile, what makes it a world worth fighting for. It’s also a world that I don’t want to leave. I keep thinking that I must be close to reaching the point where I’ve seen just about everything, but then I’ll find a new grotto or ruin or hidden cave in a nook of the map that I originally skirted around without realizing, and within it will be yet another treasure chest, block of precious ore, seed-bearing Korok, or shrine.

I’d have thought our experiences would be largely the same, but another thing I’ve learned about Hyrule is that it is an experiment in – perhaps even an ode to – player freedom. Once you’re off the plateau where Link revives, you can go anywhere you like. There are no barriers, either physical or imposed by your abilities. No order in which things must be done. More than that, how you accomplish your objectives is almost always up to you. It’s a marvel of emergent play, with rarely a single right way to do something, both in fights and puzzles. It’s for you to decide which of your abilities, weapons, gear, and elixirs to use and how. Some tasks and challenges becomes easier as Link grows in strength and earns the special powers of the Divine Beasts – giant machines that are themselves intricate puzzles – but with a little gumption and ingenuity you’ll be capable of every task in the game as soon as you soar off the starting plateau.

The Legend of Zelda: Breath of the Wild is a perfect game. Now go play. It’s almost unimaginable that you will be disappointed.

Update! Nintendo has finally released details about the upcoming DLC pack, coming out Summer 2017. Here is a breakdown of everything The Legend of Zelda: Breath of the Wild – The Master Trials DLC has to offer: